the trial balance of syed moiz co shown below 242369

The trial balance of Syed Moiz Co. shown below does not balance. 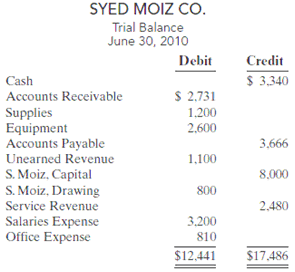 Each of the listed accounts has a normal balance per the general ledger. An examination of the ledger and journal reveals the following errors.

1. Cash received from a customer in payment of its account was debited for $480, and Accounts Receivable was credited for the same amount. The actual collection was for $840.

2. The purchase of a computer on account for $620 was recorded as a debit to Supplies for $620 and a credit to Accounts Payable for $620.

3. Services were performed on account for a client for $890. Accounts Receivable was debited for $890, and Service Revenue was credited for $89.

4. A debit posting to Salaries Expense of $700 was omitted.

6. The withdrawal of $600 cash for Moiz’s personal use was debited to Salaries Expense for $600 and credited to Cash for $600. Instructions